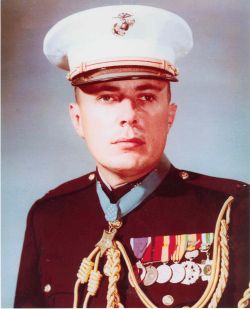 On July 15, 1966, Marine Corps Staff Sergeant John McGinty’s platoon, 3rd Battalion, 4th Marines, was unexpectedly thrown into a four-hour battle with the Vietnamese army. Shortly after being helicoptered into the jungle of Vietnam to provide support for the withdrawal of an American battalion, enemy fire began to rain on McGinty’s troops. Wounded soldiers fell around him, but McGinty continued to fight and rally his men.

During the bitter battle, two squads were separated from the platoon and left in a vulnerable position. Without hesitation, McGinty rushed to assist. He charged through extreme enemy fire, a display of great heroism and selflessness, to find 20 American men wounded and the medical corpsman dead.

Although badly wounded himself, McGinty reloaded weapons for the injured soldiers, directed fire at enemy troops and continued to shout encouragement. With McGinty’s help, the troops routed the enemy, who had already left 500 American soldiers dead on the battlefield.

Without McGinty’s fighting spirit, the outcome of the battle would have been far worse. According to the Medal of Honor citation, “McGinty’s personal heroism, indomitable leadership, selfless devotion to duty and bold fighting spirit inspired his men to resist the repeated attacks by a fanatical enemy, reflected great credit upon himself, and upheld the highest traditions of the Marine Corps and the U.S. Naval Service.”

On January 17, at the age of 73, the former Marine and devout Christian lost his battle with bone cancer in Beaufort, S.C. Although he is no longer living to share his experiences first hand, his story of self-sacrifice and personal bravery will forever be perpetuated by the legacy of the Medal of Honor.

Medal of Honor Values for Your Life