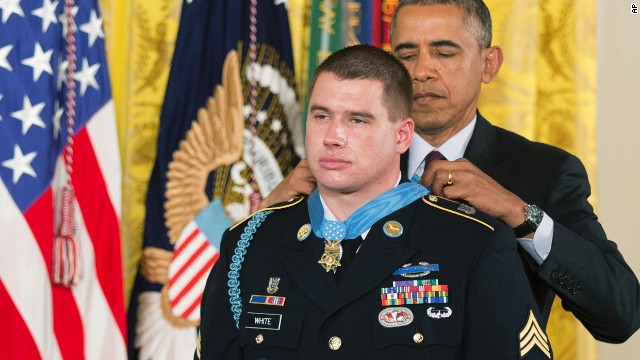 The attack began with three grenades hurling over the compound walls. The first grenade detonated and injured an Afghan National Army soldier. The second grenade failed to explode, and the third posed serious danger to two Marines.

On November 21, 2010, Lance Corporal William Kyle Carpenter was serving in the 1st Marine Division as an Automatic Rifleman with Lance Corporal Nicholas Eufrazio in the Helmand Province of Afghanistan. The two men were providing security from an observation post for Patrol Base Dakota when they were attacked.

The grenade landed on the rooftop observation post just in front of Carpenter and Eufrazio. Without hesitation, Carpenter moved swiftly to stand between the active grenade and his fellow Marine. Then came the blast. An explosion so strong, it made a hole in the ceiling of the command operations center.

His actions deflected the grenade blast and protected Eufrazio from more serious wounds. Carpenter’s body took the brunt of the grenade explosion, resulting in severe injury. His wounds were so serious, he had to be revived in the helicopter and nearly died at the hospital.

Carpenter, in his early twenties, had to spend more than two years in the hospital to overcome the injuries he took to save his fellow Marine. He suffered facial fractures, loss of one third of his lower jaw, loss of almost all of his teeth, a collapsed lung, shattered bones and a depressed skull fracture, which would require brain surgery. But he was not defeated.

“The enemy killed me. I came back, ran a marathon, completed a mud run and jumped from a plane,” said Carpenter in a Defense Department video. “I won’t ever quit. I am just getting started.”

In a White House ceremony on June 19, President Obama awarded Carpenter the Medal of Honor for his courage, loyalty and decisiveness in Afghanistan – the eighth living recipient from the conflicts in Iraq and Afghanistan.

Obama said Carpenter’s actions “will inspire for generations,” according to the Associated Press.

As Carpenter said, he is truly just getting started. Last year, he medically retired from the Marine Corps. Today, the 24-year-old is a student at the University of South Carolina and the newest member of the Congressional Medal of Honor Society.

Knoxville 2014 Convention, CMOH Society News This spring, the Medal of Honor Knoxville Convention Committee announced an impressive list of awardees to receive the 2014 Congressional Medal of Honor Society Awards. The recipients come from all walks of life, but share the common thread of commitment to the U.S. military.