Ty M. Carter is Awarded the Medal of Honor 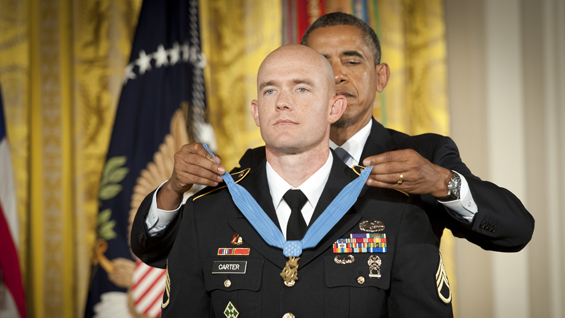 In a White House ceremony on August 26, 2013, President Barack Obama awarded Staff Sergeant Ty M. Carter the Medal of Honor for his heroic actions during the Battle of Kamdesh, in Afghanistan’s Nuristan province in 2009.

With complete disregard for his own safety and in spite of his own wounds, Carter braved a strong hail of enemy rocket propelled grenade and machine gun fire as he repeatedly ran across open ground to deliver ammunition to comrades, recover his squads radio and risked his life to rescue two badly wounded soldiers.  Carter’s actions were critical to the defense of Combat Outpost Keating.

Carter ran into “the blizzard of bullets and steel” not once or twice, “but perhaps 10 times,” President Obama said.

Carter was the 3,462 solider to receive this badge of honor, but was the first solider in 50 years to receive the Medal of Honor from the same battle as another living recipient. The first Medal of Honor for the Battle of Kamdesh was awarded to Staff Sergeant Clinton Romesha on February 11, 2013. Said Staff Sergeant Carter, "The two medals tell the truth of how terrible that day was."

Carter’s current battle is with PTSD. He has been very open about his struggle and has become a spokesperson for veterans with post-traumatic stress.  He advocates being open about PTSD, and not referring to it as a disorder. Partnering with his wife Shannon, Carter is traveling the country working to inform veterans on how to get help for post-traumatic stress and to engender advocacy.

We thank Staff Sergeant Carter for his courageous actions on and off the battlefield and his selfless service to our country.