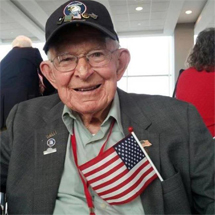 Hardman was a native of Georgia, but after retiring from the military, he moved to Knoxville, Tennessee. While living in the Knoxville area, he worked for the Havatampa Cigar Corporation and the Eli Witt Company for over 42 years before his retirement.

Hardman was an active member of the American Legion and the Woodmen of the World Life Insurance & Fraternal Society. He was also an avid supporter of the HonorAir Program, which helps to transport East Tennessee WWII and Korean War Veterans to Washington, DC to see the memorials that honor their service. Hardman donated countless hours of his time personally raising money for this program and regularly came to the HonorAir flights to see the veterans off on their journeys and greet veterans after their return flights.

Samuel Hardman was married to his loving wife, Jessie, for 49 years and has 1 stepchild, 5 step-grandchildren, and 2 step-great grandchildren.

Ty M. Carter is Awarded the Medal of Honor

In a White House ceremony on August 26, 2013, President Barack Obama awarded Staff Sergeant Ty M. Carter the Medal of Honor for his heroic actions during the Battle of Kamdesh, in Afghanistan’s Nuristan province in 2009.