The Medal of Honor Flag Flies Above Knoxville 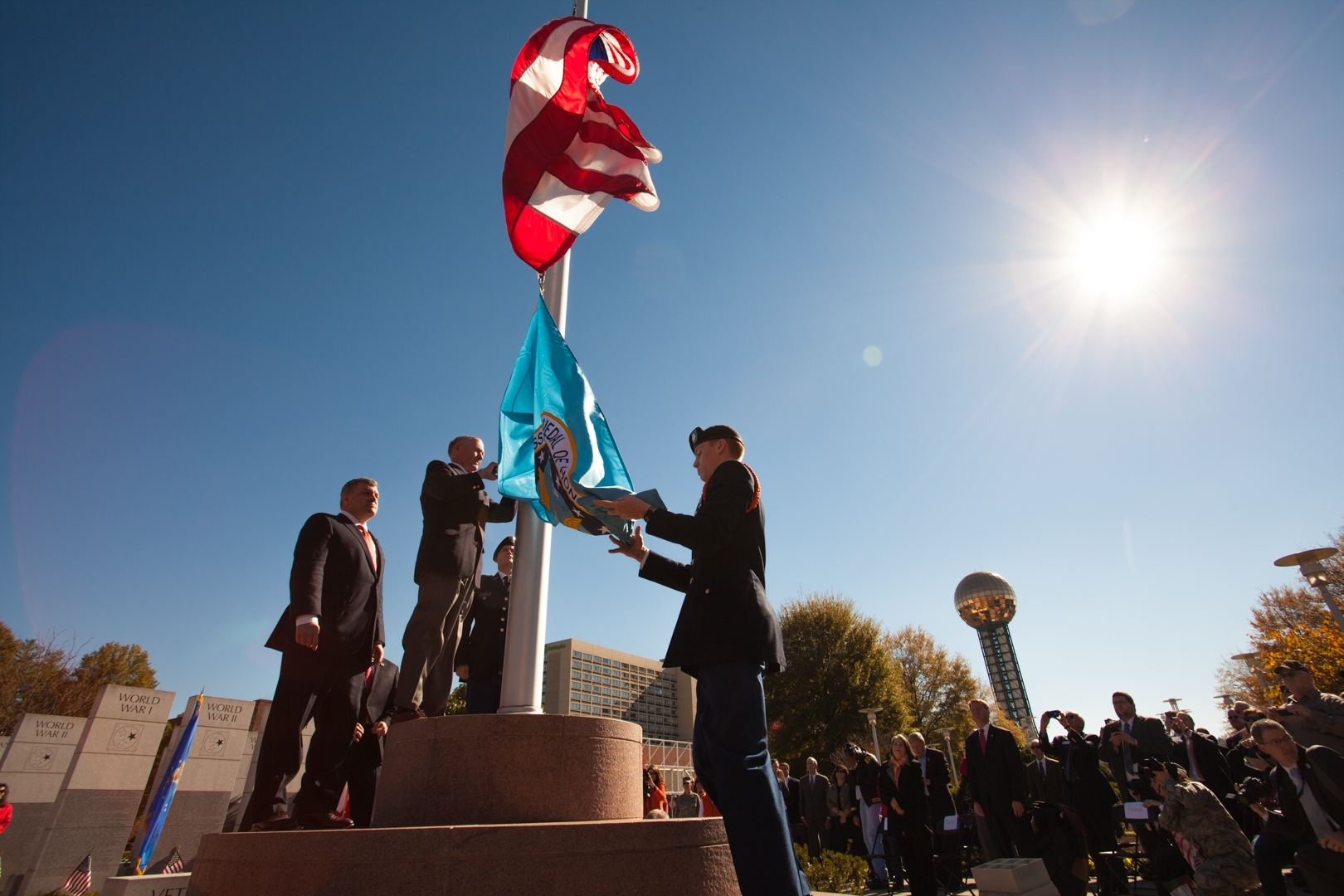 In Knoxville’s most famous park sits an area dedicated solely to the lives of American heroes. The East Tennessee Veterans Memorial is comprised of granite pillars jutting out of grass in perfectly arranged rows. Etched into the pillars are the names of 6,172 fallen soldiers, all from East Tennessee. This memorial now has another band of heroes to honor.

On a crisp November morning, crowds of veterans, city officials and patriotic citizens gathered to officially welcome the 2014 Medal of Honor Convention to Knoxville in a formal flag raising ceremony. The crowd came together with hands over hearts to kick off the ceremony with a beautifully sung rendition of The Star-Spangled Banner and graciously welcomed Chris Coyne, co-chairman of the Medal of Honor Convention to the stage for opening remarks.

“We’ve been looking forward to this day for a long time,” said Coyne. “The East Tennessee Veterans Memorial serves as the perfect home for the Medal of Honor flag. This flag is symbolic of so many things Knoxville has the privilege to represent in next year’s convention.”

To help Coyne symbolically lift the curtain on next September’s convention, a series of high profile speeches were given, including remarks from the mayor of Knoxville, mayor of Knox County and Walter “Joe” Marm, Medal of Honor Recipient, U.S. Army (Ret.).

As the official liaison between Knoxville and the Medal of Honor Society, all eyes were on Marm as he shared words on his time in the U.S. Army and his Vietnam War experience. He took the majority of his time to express gratitude to his country and to all fellow veterans throughout history and then outlined the important role Knoxville has to play next September.

“The speakers were phenomenal and really heightened the sense of excitement and importance around Knoxville’s role in perpetuating the legacy of the Medal of Honor,” said Coyne. “Ending on Marm’s speech was an excellent transition into the physical flag raising.”

Following his remarks, two ROTC students from the University of Tennessee presented Marm with a powder blue convention flag to fly under the American flag for the months to come. As a bugler trumpeted in the background and the crowd watched with pride, the flag was carefully raised to fly high above the memorial.

“Once the flag was up, you could truly feel the excitement from the community members at the ceremony,” said Coyne. “It will remain flying in the East Tennessee Veterans Memorial and serve as a symbol of personal bravery and sacrifice until the end of the convention.”

The Medal of Honor Society Gains its Newest Member

Knoxville 2014 Convention Out of a cloud of dust appears an American soldier, missing his helmet and waving an orange flag. Blatantly putting himself in harm’s way, he guides a helicopter to the ground, grabs a medic and charges back into the conflict for a fellow soldier wounded in battle. Dodging enemy fire, the two carry Sgt. Kenneth Westbrook the length of two football fields to the helicopter for medical attention. Then, a moment of compassion: the soldier kisses Westbrook on the forehead and says goodbye.